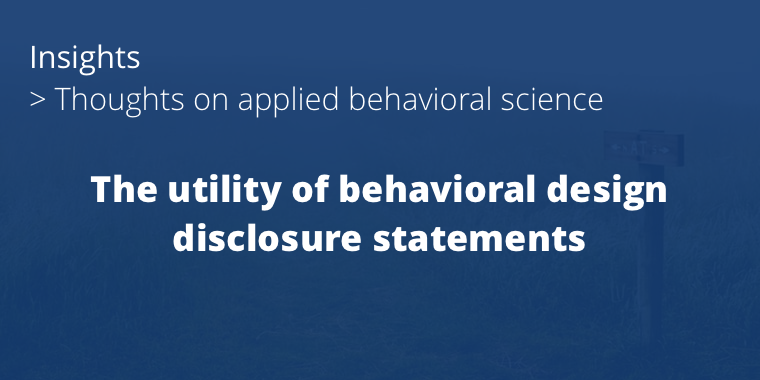 Many entities, both public and private, now incorporate (knowingly or not) behavioral economics principles into their policies and processes. They use nudges and choice architecture to increase the percentage of citizens/clients that adopt a specific behavior in certain situations. In doing so, they explicitly choose an outcome that they view as the best outcome for either:

A good example of this practice is what Riot Games does:

Riot Games, the Santa Monica-based company behind this wildly successful game, wants to raise the standards of online communities. So it is experimenting with ways to encourage positive behavior and tamp down negative interactions. — source

And once it has extensively tested tweaks to its online UI that do lower the harassment within the game, they implement it, thus shaping the decisions made by all users of its game. In Riot Games’ case, this is not viewed as problematic, since they shape users to avoid acting in a way that is universally condemned. But behavioral interventions are not often so black and white.

Libertarian paternalism is an expression coined by Dick Thaler and Cass Sunstein and widely popularized through their best-seller book Nudge. They view it as a guiding principle which can inform what nudge(s) to implement ethically. They define it as follows:

The libertarian aspect of our strategies lies in the straightforward insistence that, in general, people should be free to do what they like—and to opt out of undesirable arrangements if they want to do so. […] We strive to design policies that maintain or increase freedom of choice. When we use the term libertarian to modify the word paternalism, we simply mean liberty-preserving. […] Libertarian paternalists want to make it easy for people to go their own way; they do not want to burden those who want to exercise their freedom.
The paternalistic aspect lies in the claim that it is legitimate for choice architects to try to influence people’s behavior in order to make their lives longer, healthier, and better. In other words, we argue for self-conscious efforts, by institutions in the private sector and also by government, to steer people’s choices in directions that will improve their lives. — Sunstein, Cass R. “Nudge: Improving Decisions About Health, Wealth, and Happiness.”

Their definition is quite straightforward and the concept intuitive enough. The big issue of course is who is deciding what are the best choices for the user and whether they are really, without doubt, the best choices they make.

To take a more specific example, nudges can be used to make people better diversify their investment portfolio. The commonly held view from the financial community is that your portfolio needs to be sufficiently diversified in order to perform well in the long-term. How diversified? That’s still debatable, but if you only have 1 stock in your portfolio or a few individual stocks, or even just 1 index fund, then you would surely benefit from adding at least another asset class to it.

So your bank or investment adviser could well use nudges to nudge you to diversify more, especially through their online and mobile interfaces. And their goal would be perfectly aligned with your financial well-being, as no one disputes the fact that insufficiently diversified portfolios are sub-optimal.

The problem here are not the nudges, but the fact that their existence will not be disclosed explicitly. It’s not seen as an issue because the action your are nudged to do is viewed as the correct one by everyone and does not benefit the company implementing the nudge. But the fact that the company does not pro-actively disclose the existence of such nudges can lead to issues when the situation is more complex.

Take the customer that spreads its investments across 2 or 3 providers for example. Then he could well have only 1 individual stock composing the totality of one of his accounts, while still having a perfectly diversified portfolio across all his accounts. Yet, he will still be nudged, sometimes effectively and implicitly, to diversify more its account with only 1 stock holding.

At worst, the nudges will work and he will diversify despite the fact its portfolio really was already well diversified. At best, the nudges won’t work, but they will increase his mental load since he will have to make some efforts to ignore them.

A viable solution to this problem could be the use of behavioral design disclosure statements, akin to the privacy policies used today by any service which few people read but which disclose what personal data is collected for those who care. Such disclosure statements could serve to inform succinctly the users or customers of the choices promoted and for which nudges are being put in place.

The level of detail provided wouldn’t have to be granular and the disclosure wouldn’t mention the tests, nudges, and experiments actually used. The only points mentioned would be a list of choices promoted by the company / governmental agency. In the case of the portfolio diversification example, it could be: the number of asset classes viewed as minimal, the model portfolio promoted for different types of clients, etc.

The goal of such disclosures would be to make available to interested customers/users the information they need to make their own decisions without being biased by nudges that they may not see for what they are. Yes, 99% of the population will never look at such disclosures. But some people will, and using such disclosures at a high level would benefit the companies and governmental agencies in at least 2 ways:

One last point: some tests/experiments can be rightfully qualified of “strategic” business-wise, in the sense that competitors could benefit from even the knowledge that they are being run. For example, disclosing the testing of different pricing schemes can provide clues to competitors regarding your future roadmap. An acceptable way of continuing this strategic testing while disclosing the nudges in place that are necessary for customers to make their own unbiased decisions could be to include in the behavioral design disclosure statement exclusions. For instance: “Tests and nudges implemented regarding the following dimensions of our services will not be disclosed: pricing schemes, discount schemes.” (etc.)

In To nudge or not to nudge: cancer screening programmes and the limits of libertarian paternalism1, the authors examines the cost/benefits of the program, heavily promoted by the local health agency, of an annual breast cancer screening. They conclude that libertarian paternalism cannot justify the way the program is currently designed, in particular because it does not provide enough disclosure of the negative consequences of participating in the program. They are significant:

There is evidence indicating that of 2000 women being screened for 10 years, 10 will unnecessarily be diagnosed with breast cancer and have parts or the whole of their breast removed, and some of these will receive radiation therapy and chemo- therapy. Approximately 200 of the 2000 women will have false-positive results, and for some this will cause anxiety, despondency, sleeping problems, changes in relations to relatives and friends, reduced sexual appetite and change in existential values. These harms are not made explicit in the leaflet. There seems to be little reason to doubt that most women would consider these to be significant harms even if the numbers of false-positives were somewhat lower.

With such health-related issues, the governmental agency does have to pick one side and choose to nudge people to participate or not participate. But at the same time, the only way to do so ethically is to provide all facts to the citizens interested in getting the full picture and in making up their own choice free of any pre-designed choice architecture.