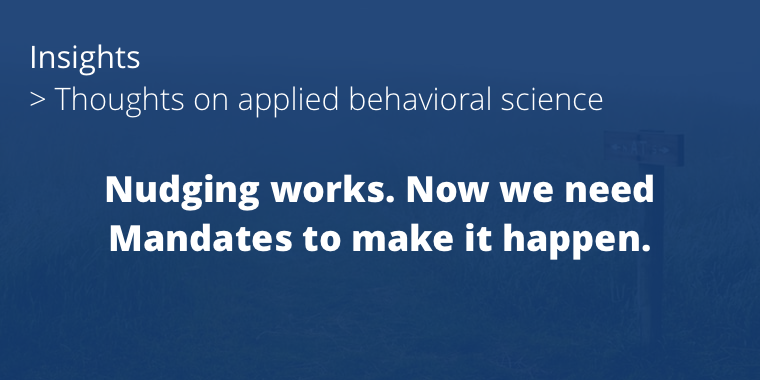 Cass Sunstein’s latest Bloomberg column about the annual reports published by both the Social and Behavioral Sciences Team at the White House and U.K.’s Behavioural Insights Team ended with this conclusion:

But it is tempting to respond that the reports are limited to valuable but relatively small-scale stuff — initiatives that increase, usually by a few percentage points, the number of people who are receiving benefits or complying with the law.

That’s not an unfair response. While behavioral science has informed some major initiatives from the Obama administration, we could see an increased effort to make a dent in the most serious policy problems. There is growing evidence that behaviorally informed approaches can help officials to tackle the largest challenges, including persistent poverty, inadequate education, climate change and crime. In the coming years, behavioral science teams within governments should devote their attention to problems of that magnitude.

I agree with him, of course, but achieving this ambition seems more difficult than just exhorting the various Behavioral Insights teams to apply their expertise to more ambitious issues. Nudging works, but that doesn’t mean it will be used, and nudging to nudge may not be enough.

First question: would Nudging be materially impactful for such deeper challenges?

I would argue that Nudges by themselves, due to their very nature—choice-preserving specifically (see here for more info), would most probably fail to achieve sufficient impact to materially change the outcomes at stake.

An example mentioned in the column is the UK BIT intervention seeking to reduce antibiotics prescriptions:

The U.K. behavioral insights team sent a letter to doctors who prescribed antibiotics at unusually high rates, noting that their peers were showing greater restraint. Over six months, those who received the letter reduced their antibiotic prescription rates by 3.3 percent (eliminating more than 73,000 prescriptions).

Will such an intervention with a 3.3% decrease materially change the probability of a pandemic due to antibiotics-resistant superbugs? Highly unlikely.

Larger challenges may call for Incentives changes and Mandates

If Nudges are not impactful enough, then we will have to change behaviors with Incentives changes and Mandates. They won’t be choice-preserving, but they will likely be needed to get the job done and achieve material behavior changes—Incentives changes and Mandates (which are nothing more than string incentives) change behaviors much more powerfully than simple Nudges.

Second question: if not sufficient by itself, is Nudging worth to implement?

It all depends of its cost an ease of implementation. Most Nudges are low-cost, and this low cost make them really efficient even at a low absolute impact. Consider the antibiotics example again: such decrease by sending just 1 letter is a very efficient intervention.

Backfiring is still possible and must be monitored

Backfiring can occur with Nudging for such issues though. Implementing choice-preserving Nudges is much less costly politically than implementing Incentives changes or mandates, when the behaviors targeted are unpopular.

Politicians may be tempted to implement low-risk Nudges and use them as an excuse for not implementing more effective (but unpopular) measures.

Nudging as systematic complement to Incentives and Mandates

Nudging won’t materially change outcomes for our largest global challenges, but they will most likely marginally improve outcomes for a very low cost. They should therefore be used systematically to amplify the other measures taken.

Third question: how then do we make Nudging for more ambitious challenges occur?

Both the White House and UK BIT teams would undoubtedly like to deploy their expertise to more significant challenges. Why, then, are they not doing it?

The first answer is that even though Nudges are low-cost/low-risk tools, they still are risky tools. And if the results are not positive, then the bigger the challenge tackled, the bigger the potential risks for those involved.

So Nudges to increase tax payments due or retirement savings are currently implemented, but Nudges that would shape behaviors in ways that may be unpopular are not.

The second answer is that organizational change is hard to make happen, and all significant Nudging depends on an organization to be put in place. The guidance document mentioned above is just that, guidance. The most likely outcome is that when the agencies’ incentives are aligned with Nudging (like letters to increase tax due payments for tax agencies), then Nudges will be implemented. If they don’t align, they won’t.

Nudging by itself is low-risk, low-cost and often straightforward to implement. But the larger the challenge, the larger the organization(s) involved and the more effective Nudging is, then the more difficult it will be to get to an agreement to make it happen.

In the end, the time and effort needed to make Nudging happen may be better spent on making more efficient Incentives/Mandates.

Nudging works, but Mandates may be needed to have it implemented systematically

So the use of Nudging “best practices”, like making it easy for a citizen to complete administrative formalities, should be seen as a systematic step to incorporate in public policy.

But most organizations will resist these, unless they amplify current practices, since implementing Nudges will mean implementing changes.

So Nudging do works, but it may well need Mandates to occur.